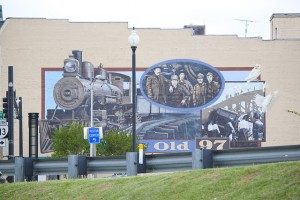 When the Association first started planning for a mural program, our objectives were clear.  We wanted to do something that would bring people downtown again and to celebrate Danville’s history!

RDA’s goal is to fund 10 murals in the River District that tell the story of Danville’s history and current life.  To date, 2 murals have been completed; both painted by famed Dothan, Alabama muralist Wes Hardin.  The first is a depiction of the wreck of “The Old 97” Southern Railway freight train.  Some say the 1903 accident is what first brought Danville national attention as thousands visited the scene and songs were written about it.  The mural was completed in December 2005 on the wall of the former Atrium building at 310 Main Street.  During the summer of 2006, the second mural, featuring Danville’s trolley and theaters, was proudly unveiled at 127 N. Union Street as part of the City’s transportation hub upgrade.  Danville residents were invited to have their likeness featured in the mural.

Plans for a third mural paying tribute to Danville’s tobacco industry have been in place since 2007.  Unfortunately, due to the economic downturn, it became increasingly difficult to achieve fundraising goals.  In 2015, however, RDA revived its mural program and is ready to install a third mural in the Tobacco Warehouse District.  We are now accepting proposals to paint the mural at Gentry Lofts, 308 Craghead Street, facing Loyal Street!  Click here for the RFP, due 4 p.m., Thursday, August 25, 2016!

There are no upcoming events.